The Biggin Street Incident: The Straw That Broke The Camel's Back

In the mid-1980s, a 27 year-old woman called, "Karen" was admitted to St. Augustine's Psychiatric Hospital, Chartham, near Canterbury in Kent, suffering from a mental illness so severe that at one point the Senior Consultant said, "Perhaps it would be better if Karen were to spend the rest of her life in hospital."

On admission, the combination of mental illness and administered medication gave Karen the appearance of what can only be described as 'catatonic': her face was as stiff and immobile as if carved out of wood, the irises of her dull lifeless eyes appeared to be painted on; Karen drooled, she didn't move, nor did she respond to any attempt to talk to her.

If Karen had spent the rest of her life in hospital then she would have done so as a human vegetable.

Acting as a private individual, knowledge of a specific type of psychological trauma [1] was employed in order to "bring back" Karen to a point where the usual agencies were able to take over.

A more complete account of Karen's story will eventually appear in this "Abuse in Dover" category. For now, it is sufficient to say that Karen, as a number of the more experienced staff at St Augustine's already knew, didn't have a mental illness at all: her condition was simply the result of nearly 27 years of non-stop psychological abuse.

None of the people who contributed to Karen's condition - everyone from parents and siblings to virtual strangers - ever saw themselves as abusers. On the contrary, the people responsible wouldn't have thought there was anything remarkable about the the way they had behaved towards her.

This morning - Wednesday, 24th of June, 2009 - I was making my way into town from Robsons Yard in the Tower Hamlets area of Dover when a cheerful voice said, "Hello, John!". Looking up, I saw the bright and smiling face of Karen. A face that was a little too bright, perhaps, for Karen has continued to need intermittent support throughout the years from the time her awareness of the world had been restored.

Nevertheless, Karen most certainly does have a life of her own that for two decades now has both been experienced and enjoyed: whatever else may happen in the future, Karen can never go back to her previous condition.

By way of contrast, on Monday of this week a middle-aged man was walking along the shopping precinct in Biggin Street, heading towards the Town Hall.

A woman of 20 or so, who was coming the other way, saw the man whereupon she suddenly changed direction and then deliberately walked by so close to him that the man had to turn away in order to avoid a collision. 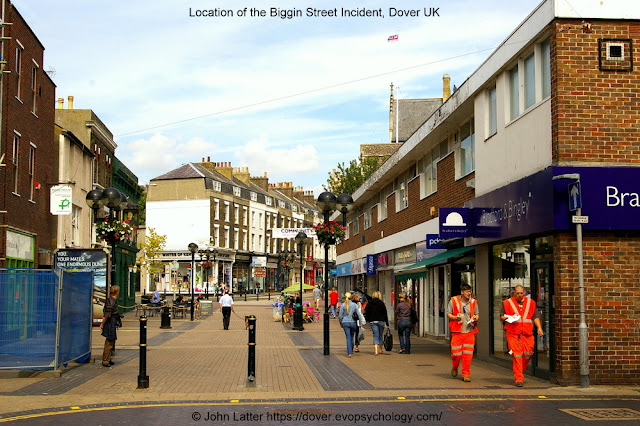 The man showed no other awareness of the woman as he continued on his way and this, coupled with the look on the woman's face when she first saw him, suggested she knew of the man, rather than they had had any previous contact.

Human behaviour is as varied as the apparently infinite range of patterns found in a kaleidoscope.

Knowledge of trauma, with its 'point of origin' in the older (in evolutionary terms) structures of the brain, is equivalent to knowledge of the far fewer internal coloured pieces of glass in a kaleidoscope that give rise to the 'infinite range' of externally observable patterns.

Once the nature of the coloured pieces of glass is known, along with how they interact, then sub-ranges of the external patterns they are able to generate become quite predictable.

In other words, a perception may be developed that can differentiate between outward behaviour of natural origin and that which is a function of an acquired psychological history (or, as is usually the case, any 'mixture' of the two).

From observational and inter-active experience, and as a function of instinctive response, this perception is no more than what many a psychologically injured child demonstrates providing post-trauma experience has not begun the process of transforming a 'victim' into a 'perpetrator' (eg such as becoming a 'bully').

Without such perception, Karen would still be in hospital.

When the woman first saw the man in Biggin Street, her face hardened as she internally reacted with the surface of a 'capacity for violence' that she hadn't been born with, and which now exists in the place of more natural attributes (there's no such thing as a free lunch: later posts will show how the presence of one thing necessarily means the absence of another).

Additionally, even though the woman was only accessing the 'tip of the iceberg', her potential for violence exerted so powerful a grip that she was unable to walk towards the man in anything like a natural manner: instead, she had to march.

Nor was this a case of an attempted 'minor physical assault' - the man was too powerfully built for the young woman to be confident of the outcome of such a direct confrontation.

What the woman was confident of, however, was demonstrating her capability to psychologically harm and distress natural life; beneath this lies the potential to inflict trauma, and ultimately, to physically kill.

The mechanism is very simple: by allowing the tip of her unnatural violence to show, the woman radiated the psychological message, "I have both the capability and the conscious intent to kill you": it is this collusion between the consciousness and a corrupted psychological history that identifies this woman as a professional abuser (at the other end of the spectrum, Karen would conventionally be seen as a professional victim).

The effectiveness of this type of approach is determined - rather obviously - by any pre-existing psychological wound the intended victim may have.

If, for example, the man in Biggin Street had had what he considered to be a 'vulnerability', but which in reality was an unrecognized and unacknowledged childhood trauma created (usually) by a psychologically violent parent, then seeing exactly the same potential for unnatural violence within the woman would typically cause an internal reaction with the 'vulnerability'.

Any resultant outwardly visible expressions of fear or anxiety would have made the woman feel unnaturally exultant. In addition, any behaviour implying submissiveness - such as if the man had scurried out of the way, for example - would be the 'icing on the cake' and only heighten the woman's unnatural feeling of domination.

Part of the reason this incident in Biggin Street has proven to be, "The Straw That Broke The Camel's Back" is because the young woman is but a single representative of an easily identifiable class of abusers who are a Clear and Present Danger to Natural Life - and child abuse is only one aspect of the harm they inflict on anyone unfortunate enough to come within their 'sphere of influence'.

And that sphere of influence can be quite large: there was a strong impression that the woman knew of the man, but that they had never met before. If so, then "gossip" may very well have been what had pre-triggered the woman's acquired capacity for violence.


Gossip is a very common mechanism employed by abusive personalities in order to pass their victims around from one to another (of which more will be posted later).

From seemingly casual and innocent conversations with personality types similar to that of the young woman, it is clear that they have no self-awareness of being abusers.

Indeed, if one of these abusers told another of their kind that someone else was an abuser, then it wouldn't matter if the allegation were true or not: with their unnatural violence triggered, the real abuser would target the hapless victim and feel nothing short of righteousness as they did so!

Astonishingly, professional abusers of this type almost always see themselves as the "good guys" - after all, from their perspective, they only attack the natural life within those, whether child or adult, whom they have judged to be in some way "naughty".

One characteristic which is worth mentioning here is how an abuser, once they are in 'kill' mode, will often interpret any ensuing signs of psychological fear in their victim as evidence of 'guilt' - as if they say to themselves, "Aha! you must be worth being damaged more than I first intended to!"

It apparently never occurs to an abuser to ask themselves where their capacity for violence (whether it be physical or emotional, or any combination thereof) comes from, and nor do they ever look in the mirror and dimly begin to realize that the biggest source of 'badness' in their world is looking right back at them.

This is the first post on the, "Dover Blog: The Psychology of a Small Town" website and the validity of the foregoing statements will only become apparent once sufficient background material has been provided in the relevant research categories (Evolution, Psychology, Social Psychology).

There is a caveat to understanding the research, however, which may be illustrated by the following updated post originally made to a forum:

A few weeks ago I watched a television reporter interview a female show-jumping rider who had just completed a clear round in an international competition. As you might expect, the rider radiated both happiness at what had just been achieved and also excitement at what the next stage might bring.

Throughout the interview the woman kept glancing affectionately towards her horse and occasionally patted its head. Her enthusiasm was contagious: towards the end of the talk you could hear the smile in the out-of-shot reporter's voice as he suggested the horse be given an extra sugar-cube for its 'performance'.

It is not possible for a horse to accept being ridden by a human being unless the horse has sustained the specific type of trauma (the Archaeotrauma - see [1]) that is at the core of this research - and it is worth noting that the empathy Monty Roberts (the 'horse whisperer') first found with horses was based on recognition that they had both suffered similar kinds of wounds at the hands of his father.

The real relationship between rider and horse is this: "I will care for, and love you, for precisely as long as you do exactly what I want. Should you wish to go right when I want you to go left, however, then I will hit you with a whip. This will cause internal reaction with the psychological wound created when you were "broken", you will fail all over again, thus enabling me to re-establish unnatural control.

Similarly, when a horse shows "affection" towards a rider, it is basically saying, "Thank you for not hurting me at the moment, and thank you for the sugar-cubes which provide a further diversion from the ongoing ache of the internal wound". In other words, the relationship between rider and horse is of psychological, rather than natural, origin.

Human relationships, no matter how pleasantly the public image may be presented, can also be based on the same underlying principle. Indeed, even if the human equivalent of the whip is only used occasionally, prolonged exposure is probably still sufficient to induce any number of psychosomatic illnesses ranging from asthma to cancer. As far as projected public images are concerned, all that glitters is not gold.


Any aversion to the natural reality of the relationship between horse and rider being an abusive one will make understanding the research categories difficult. This is because the material that will appear in them reflects the nature of life, and the injuries that can occur to it, on the 'other side', so to speak, of any and all acquired 'aversions'.


[1] The Archaeotrauma - the psychological wound a horse sustains when it is 'broken'; other mammals, including human beings, are equally susceptible.
Posted by John Latter at 15:53 3 comments: